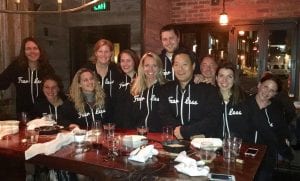 Ming with our fearless team.

To accomplish what we need to at Family Reach, you have to be fearless. The stakes are high, the system is broken and families with cancer are dealing with the unthinkable.

As the President of our National Advisory Board, Ming Tsai has what it takes to be fearless and it’s contagious – there isn’t a member of our Family Reach team that hasn’t been touched by his bold nature. Together, we’re changing the face of cancer.

I’ve watched Ming in action for years. I’ve seen him greet total strangers of all ages and status as if they were life-long friends, step into the limelight with ease and tackle new opportunities without fear, even if they’ve never been done before or failure could be eminent. I know Ming is who he is today because of his upbringing. It only takes a couple of his childhood stories to understand why he’s so fearless in his approach to life.

Ming grew up in Dayton, Ohio, and is the younger of two boys. His parents are his heroes – he often reminds me that his father is the smartest person he knows. When it came time for Ming to attend high school (scary enough for most 15 year olds), his parents decided to send him to the prestigious Phillips Academy Andover in Massachusetts. Mere days before the start of the school year, Ming’s parents packed their youngest son’s belongings into one suitcase and drove him to the airport, where they hugged him goodbye and headed back to their home in Dayton. Alone, but unfazed, Ming happily disappeared into the flurry of airport passengers and began his journey to Andover, a place he had only seen on a map. After arriving at Boston’s Logan Airport, 15-year-old Ming then had to find his own way to Andover, a place an hour north of the city, and move himself into his dorm room. Fearless.

Ming tells this story very nonchalantly, no big deal; don’t most high school kids have this experience? Over the course of the last six years I’ve known him, I’ve heard about many of his adventures and often find myself shaking my head as he shares another behind-the-scenes kitchen story, thinking, “This is the one where he tells me he didn’t pull it off!” But that has yet to happen, and I continue to marvel at his ability to tackle any issue or situation with excitement and fervor.

With his fearlessness in hand, he has raised close to $5 million to help families with cancer stay afloat. He talks to everyone he meets about the mission, visits our families in hospitals across the country and is the brains behind Cooking Live!, a dynamic fundraising event that brings together his extraordinary chef friends.

To most of the world, Ming Tsai is a well-known, extremely talented chef, but to all of us at Family Reach, there is so much more to the story. He’s a fearless part of our team and, thanks to his dedication; we’re expanding our reach each and every day.