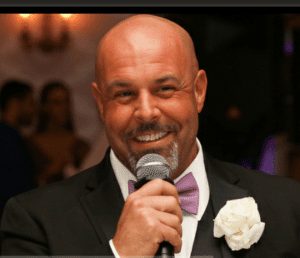 One of the greatest things about heroes is they come in all forms. Whether it’s your neighbor, the barista at a coffee shop or a high school student, you never know who is quietly making a difference.

We are proud to share the story of Pete, a 49-year-old firefighter who was part of the search and recovery efforts at Ground Zero in 2001. Sixteen years after this tragic event, Pete was diagnosed with throat and thyroid cancer as a direct result of the toxins he was exposed to on 9/11.

Pete had been a firefighter for six years and was living in New Jersey when tragedy struck New York City. He knew he had to take action.

“I was watching television and just sitting there, thinking is there anything I can do? There are people trapped under all that rubble,” says Pete. “Then I got a call from one of the firefighters at the firehouse and he said let’s go and help out. So we went.”

Pete was at Ground Zero for about a week. He says one of the toughest parts was seeing the destruction for the first time. Cars flattened completely, high-rise buildings demolished and a white powder coating the air.

“It looked like a nuclear bomb went off,” says Pete. “And as we got closer, there was a very sweet smell. I expected to smell a fire, like wood burning, but that wasn’t it. It was the oddest smell, a mixture of fire, jet fuel, burning and smoke. I had never smelled anything like it.”’

He helped to sort through the rubble alongside fellow firefighters with hopes of finding people alive to bring back to their families.

“I was part of the bucket brigade, picking up rubble and passing it down to the bottom,” says Pete. “They gave us respiratory masks to wear, like the ones you see at hospitals, but a lot of us ended up taking them off. Nobody knew at the time there were toxins in the air.”

Prior to his diagnosis of cancer, Pete was laid off due to a work injury. He immediately applied for disability and is still waiting on the determination to this day.

“I’m trying to pay my mortgage, put food in my home and pay the bills. I am going through my savings like water,” says Pete. “And my retirement fund is now depleted. I never ask for money. I pay my bills on time and help others in need,” continues Pete. “I think my pride got in the way of asking for money from a nonprofit sooner. Eventually, I had to put it aside and accept the help.”

Support from the Family Reach community allowed Pete and his family to keep on top of their everyday bills and offset the cost of travel expenses to and from his daily treatments.

Pete remains courageous despite having been involved in such a heartbreaking experience and learning he had stage-four cancer because of it.

“Something that really changed my attitude was when I became friends with an 8-year-old boy who has cancer in his pelvis,” shares Pete. “Seeing him and talking to him during radiation, he’s a trooper. Looking at him and the other kids going through this, that was really hard. Here I am, almost 50, and there are kids in there who are jipped out of their childhood.”

Pete is a proud husband and father to two children – a daughter and stepson. He describes his family as emotionally strong, especially throughout this challenging time in his life.

“I remember when I told my daughter. I sat her down and she just stared at me,” says Pete. “And then she said, “Well, you know, you don’t have to worry about losing your hair” – ‘cause I’m bald – and that made me laugh. Then we hugged and she said I’d beat this.”

We are happy to share Pete is cancer free as of April 2018! He will continue to get routine body-scans every three months for the next five years to make sure the cancer doesn’t come back, but for now he is fully embracing life.

“I live life day-to-day and I love life more than ever,” says Pete. “I want to see my daughter graduate college, meet someone and get married. I want to see grandkids and grow old with my wife. That’s what will always keep me going.”