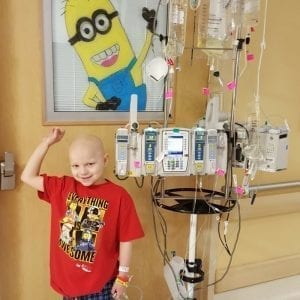 Two weeks into treatment and Landon was still all smiles!

In January 2015, Landon was diagnosed with acute lymphoblastic leukemia (ALL) at just eight years old. His parents, Heather and Richard, could not begin to imagine the financial strain that their family would endure.

Described as articulate and gregarious boy, Landon began treatment in El Paso, Texas, an hour away from their home in New Mexico. Heather and Richard had to drive to the clinic frequently with Landon. Landon was extremely high risk due to a chromosome abnormality, which caused him to have to receive most of his treatment when he had scheduled or unscheduled hospitalizations.

Within the first month of Landon’s treatment, the family’s household income dropped by almost 50% due to Landon’s father taking an unpaid leave of absence. The Chavez family was struggling to make ends meet due to the additional burden of high out-of-pocket medical expenses, travel costs and insurance fees. After a molecular relapse in December 2015, doctors made the referral that Landon move to Children’s Medical Center in Dallas for a bone marrow transplant. The transplant was confirmed in February, when Heather had to make the tough decision to move to Dallas with Landon while Richard stayed home with Landon’s older sisters, Mackenzie, 13 and Emily, 9.

As Landon underwent aggressive treatment to prepare his body for the transplant, his parents struggled to manage the overwhelming financial and emotional effects of his disease. Even though Heather was able to work remotely, her and Richard’s incomes were still reduced significantly while they family faced the additional strain of a second household.

Landon’s social worker recognized that Heather and Richard were in need of support and assistance as Landon’s treatment continued. She submitted a grant request to Family Reach to cover one month of the family’s mortgage. Three days later, the mortgage company received the payment. Family Reach was able to, “provide a little room for us to breathe and try to come up with an alternative plan provided us with a peace of mind that was rare at that time.”

Grateful for the support, Richard and Heather finally felt as though they “had a minute to catch their breath and come up with a plan.”

With Family Reach’s support, Heather and Richard were able refocus all of their energy on getting their son healthy enough to return home to New Mexico.