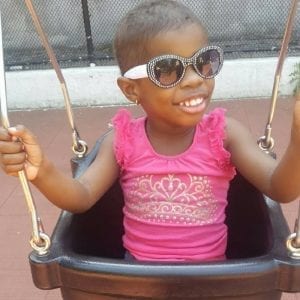 Alayna is never seen without a smile on her face!

Alayna is an extremely sweet two-and-a-half-year-old girl receiving treatment at New York-Presbyterian Hospital for metastatic rhabdomyosarcoma, a form of cancer found in the muscle tissue. While the treatment is tough on Alayna’s tiny body, she goes through each day with a huge smile on her face.

Alayna’s mother, Tresha, first knew something was wrong when she found a large mass on Alyana’s upper thigh. Wasting no time, Tresha took her to the hospital where she received the news and an intensive treatment plan involving surgery, radiation and 42 weeks of chemotherapy.

Tresha was forced to make the difficult decision to move her and Alayna from their home in Jamaica, New York to Brooklyn. There Tresha’s mother, Marlene, was available to provide additional support while relatives in Jamaica watched over Alayna’s brothers.

The tough decisions didn’t end there. Due to Alayna’s extensive treatment schedule and the debilitating side effects, Tresha was unable to work. Marlene became the sole earner for the entire household. Just six months after diagnosis, Tresha and Marlene had used up all of their savings and a majority of their income to help finance Alayna’s treatment.

Tresha began to worry. How could she care for her critically ill daughter and keep her family afloat? Rent on their home became particularly difficult to keep up with and the fear of becoming homeless became a real possibility. That’s when Tresha turned to her social worker and asked for help.

Family Reach was able to step in and help pay for Tresha’s rent for two months. This grant immediately stabilized the family’s housing situation and provided necessary relief to Tresha and the rest of her family.

Described as a “warrior princess,” even during the toughest days of treatment, Alayna and her family are now able to continue fighting cancer without the financial strain.