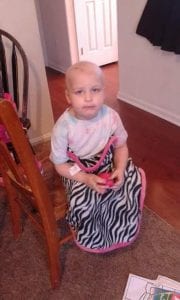 Lily in her home during treatment

This is what happened to Lily’s family when she was diagnosed with epithelioid glioblastoma cancer at only 3-years-old.

“The news was devastating. We were told she had a tumor the size of a golf ball and needed immediate treatment,” says Lily’s mom, Samantha.

Due to the intensity of Lily’s cancer, she began undergoing high dose chemotherapy, which wasn’t working. Lily’s team of doctors transitioned her to radiation therapy with hopes that it would work better. Unfortunately, the doctors didn’t see any progress, so they enrolled her into a trial study as a final therapy option.

“We had been in and out of the hospital for months when we were told the radiation may not keep her tumor away. The thought of losing Lily was too much to take,” shares Samantha.

Lily is a fun-loving little girl. She loves Batman and princess Elsa and enjoys playing with Legos. She had recently moved to Colorado with her parents and two siblings when they found out about her diagnosis. Her father, Anthony, had just started at his new job while Samantha stayed home with their three kids. This family of five had no way of planning for the unexpected medical bills with which they were now consumed.

“My husband eventually lost his job because we needed to be there for Lily’s surgeries and treatments while taking care of our children. This left us with no income,” says Samantha. “We were scared to lose our house, our family truck unexpectedly broke down and we had no money to pay for food.”

Finding their own superhero 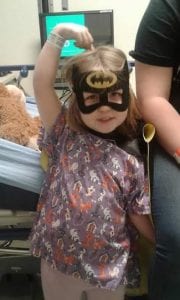 Lily dressed up as her favorite superhero, Batman

Thanks to our generous community, we were able to assist the family with their rent and grocery expenses. This gave them the stability they needed to fix their truck to get Lily safely to treatments. And, eventually, Anthony found a new job.

After two months in the trial treatment, the family received news that Lily’s tumor was finally gone.

“It has not been an easy road. Cancer affects the whole family, but we are stronger now,” says Samantha.

In spite of all her treatments, Lily inspired the family to keep moving forward. Her love for dancing and entertaining sense of humor is what kept their spirits alive.

“Lily has gone through numerous surgeries, too many MRIs to count, chemo, radiation and she had two ports put in her,” says Samantha. “She lost her hair and gained many scars, but she never let any of it get to her. Whenever we would get down, Lily would be the one to smile and remind us that it would all be ok.”

Sometimes, the superhero we seek in darkest of times is the one you would least expect.

If you want to help more families like Lily’s stay in their home during their cancer journey, click here.